Find us on Google maps here >>

History of The Old Station Tea Rooms Download our History as a .pdf here >>

Created in a time when steam ruled the country and promoted by local solicitor Charles Castleman, The Station House at Holmsley was a sad casualty of the Beeching cuts in the 1960's.

With the industrial revolution in full swing, the country was expanding at an incredible rate. The mid 1800's saw great development, but the transport system needed to meet this challenge head on, and great investment was made into the railway network. One such route was to connect up the main line to London with that of the West Country. 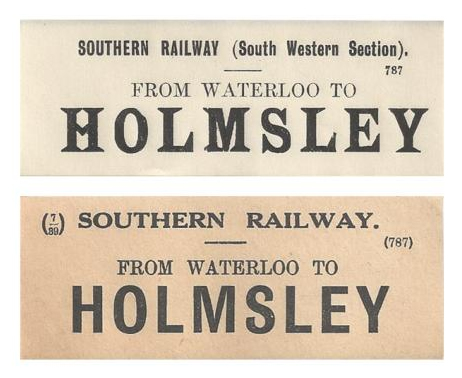 June 1st 1847 saw the opening of the station at Holmsley. It was located where the line met the A35, the main route from Christchurch to Southampton, and referred to (until 1894) as Christchurch Road.

The new line was heavily promoted by Charles Castleman, a prominent local solicitor who saw the benefit and potential of the expanding rail network. Its winding route, taking in local market towns, earned it the name "The Corkscrew", something is is still known as today. The line gained popularity in the early 1900's with commuters and families alike, and was also an important freight depot for the transport of local wood for construction of Welsh coal mines.

The growing popularity of the cars in the 1950's meant a serious assessment was made of the network, culminating in the now infamous Beeching Report in 1963.

Holmsley was one of 2200 casulties, and closed for good the following year. Now steam has been replaced by cycle and walking power, as the Castleman's trail has become a popular route taking in some of the forests most amazing scenery.

But what of this intrigue and mystery that surrounds the station?

In the late 1800's the eldest son of Queen Victoria, Prince Edward, frequently disembarked at Holmsley with his then mistress, Lillie Langtry, enroute to their exclusive residence in Bournemouth.

In 1899 Robert Louis Stephenson, who was a local resident, cast Holmsley Station as 'Browndean' the fictional station in his novel 'The Wrong Box'.

In 1907, Holmsley was the arrival point of Kaiser Willhein of Germany and his cabinet, to attend a conference with Major Stuart Wortley at Highcliffe Castle.

The station's finest hour and lasting memories will undoubtedly be during WWII, when it played an instrumental part of the troop and freight deployment to the aerodrome at Holmsley South. In May 1944, with preparations for the D-day landings, Eisenhower and senior government officials were frequently seen.

The post war years led to a much quieter life for Holmsley Station. Thoses keen to explore the forest on foot were the main users, and with the main line now running throught Sway, Hinton and Christchurch, the hustle and bustle of previous years became a distant memory.